When we bought our property and remodeled it miraculously and put it into use, we didn’t know it would lead to a series of building projects. We had also built a few things before that, but these projects were not comprehensive. Because we had successfully settled in our Strijp R area, the idea arose to make “Piet Hein Eek Homes”. Instead, I came up with a concept for the repurposing of the RF building and we later bought the RAG building to develop that. I found it difficult to see that frantic attempts were made to cram all kinds of inappropriate functions into the buildings and to realize architectural feats on top of that. If you do that, the original premise, namely a beautiful old industrial building, is no longer important or leading. For us, only one thing was paramount: to allow people to live and work in the buildings in the simplest possible way with respect for both the building and the users. The RAG building initially turned out to be the most difficult to realise, but once we realized that we could create a huge passage right through the building, allowing light and air to reach all houses, this building turned out to be very popular. . The way of living with the living room and kitchen on the first floor, adjacent to a large roof terrace, has naturally floated out of the shapes and design of the building. At the moment we are fully building and 9 of the 10 apartments have been sold. The RF building had meanwhile passed through the hands of various parties, but had not yet been sold completely. We have now got the hang of it and have further fleshed out the plan for Building Part 1, whereby we again have the cooking and living area adjacent to the garden or the roof terrace. Exactly as we would like to live, cook or work ourselves. There is also a lot of enthusiasm for these apartments. You could say that we are completing the circle with the design of the Green Houses, because with these houses, after what we later see as a necessary detour, we give substance to the first assignment: making “Piet Hein Eek Homes”. op Strijp R. The design was inspired by the industrial heritage projects (RK, RF and RAG) from the immediate vicinity, which we started working on very intensively without premeditation. The insights and knowledge about the construction, the area and the way of living that we have previously gained are contained in the Groene Woning. The idea of ​​living on the first floor with a sunny roof terrace was the reason to fill in the surrounding lots with comparable new-build homes. Instead of hard and yellow bricks, the new houses are covered with hedera on the outside. The new Green Houses will blend in with their surroundings – after all, Strijp R is an area where greenery forms the starting point – and will also have a connection with the source: the RAG building. 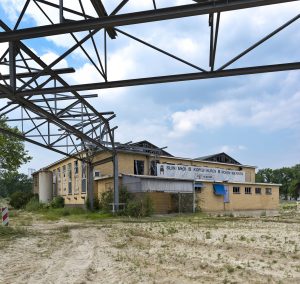